Okay fine, I admit, I’m completely biased when it comes to anything to do with this coast town in England. But I honestly wouldn’t tell you to visit Brighton if I seriously didn’t think it worth your while. So, hear me out!

My history with Brighton stretches back to 2004 when the 15-year old me embarked on a language course there. It was my first big step towards becoming independent, and oh what a step it was. Had I known what an enormous part that visit to Brighton would come to play in my later life, I probably would never have returned.

Brighton is officially called ‘Brighton and Hove’ after its unification with the town of Hove in 2001.

Brighton’s popularity rests in its location by the sea as it used to act as a port for ships going to France, and a spa town where people went to recover from whatever illnesses. Preferred by the royals it developed into a very fashionable seaside resort.

Today Brighton is a haven of culture and arts, diverse communities and quirky shopping areas that you can’t find anywhere else. Seriously, not even in London. But there’s so much more as well!

6 Reasons Why You NEED To Visit Brighton

The beach is the heart of Brighton. It’s the place to meet friends for lunch or coffee, the place for watching sunrises and sunsets, the place to listen to waves wash over the pebbles and take a deep, deep relaxing breath.

The sea has always been the one thing that calms me down, no matter how much stress or grief I might be under. The sound of waves is the most natural, most beautiful rhythmic sound in existence. So, obviously the fact that Brighton has a beautiful beach has contributed greatly in me loving the city so much. But it’s not just waves you get to see on the Brighton beach, oh no.

In the Victorian era Brighton got its famous beach side hotels and the 2 piers: Brighton Palace Pier and the West Pier, which is only a blackened ruin nowadays. It was destroyed by 2 fires in 2003 and torn apart by storms. But still its battered skeleton stands out there in the sea on its own. Sisu!

On the Palace Pier, on the other hand, one can spend a whole day happily. There’s an amusement park at the end of the Pier, but before that you encounter a gaming hall, with all included from slot machines to virtual reality games, and cafés and restaurants to have a wee break at (it’s a long Pier).

We sure found ourselves on the Pier regularly when I was spending the Summer in Brighton at my teens. I still remember meeting one of my current best friends there. Had I ever met her if I hadn’t gone to Brighton? Probably not. And so life happens. 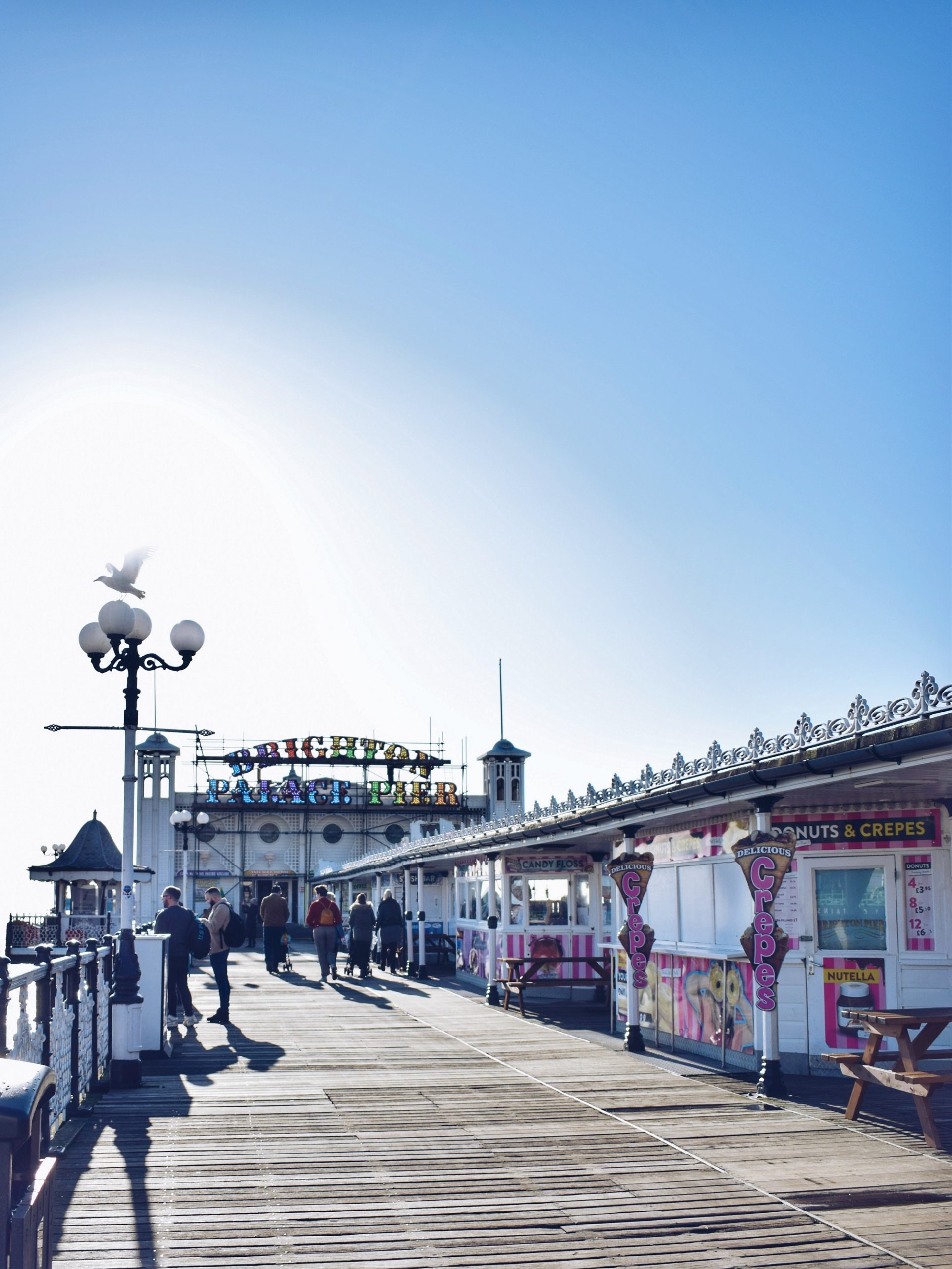 I knew last week, when I visited Brighton, that this was the riskiest part of my trip financially. Brighton has the most unique shops and boutiques and I’m one for unique garments! I’ve never liked wearing clothes that half of the city was wearing, I wanted to stand out.

If you’re the same, you gotta visit Brighton! They’ve got local brands and independent entrepreneurs creating the most beautiful clothes and accessories that you can’t get anywhere else. And they’re not even too expensive!

There’s this one shoe store, Irregular Choice, which is beyond Alice in Wonderland. Their shoes are decorative, colourful, completely crazy and so amazing that it don’t matter what’s on trend, you’ll rock the streets in their shoes. (Un)fortunately I didn’t have the money this time, but I will buy a pair from them in the near future!

In addition to Bond Street and the famous Lanes with their unique little stores, Brighton also has a shopping mall, Churchill Square. There you can find all the boring fast fashion brands that make you drown in the crowd ;D Brighton was favoured by the royals in the 18th and 19th centuries, which means that there’s gotta be a castle or a palace somewhere. And oh yes, there is! And it’s not just any palace.

The Pavilion greatly resembles the palaces in India with its onion roofs and decorative facade, which is a bit peculiar considering the Brits’ sense of architecture in regards to royal dwellings. But it fits in Brighton perfectly! 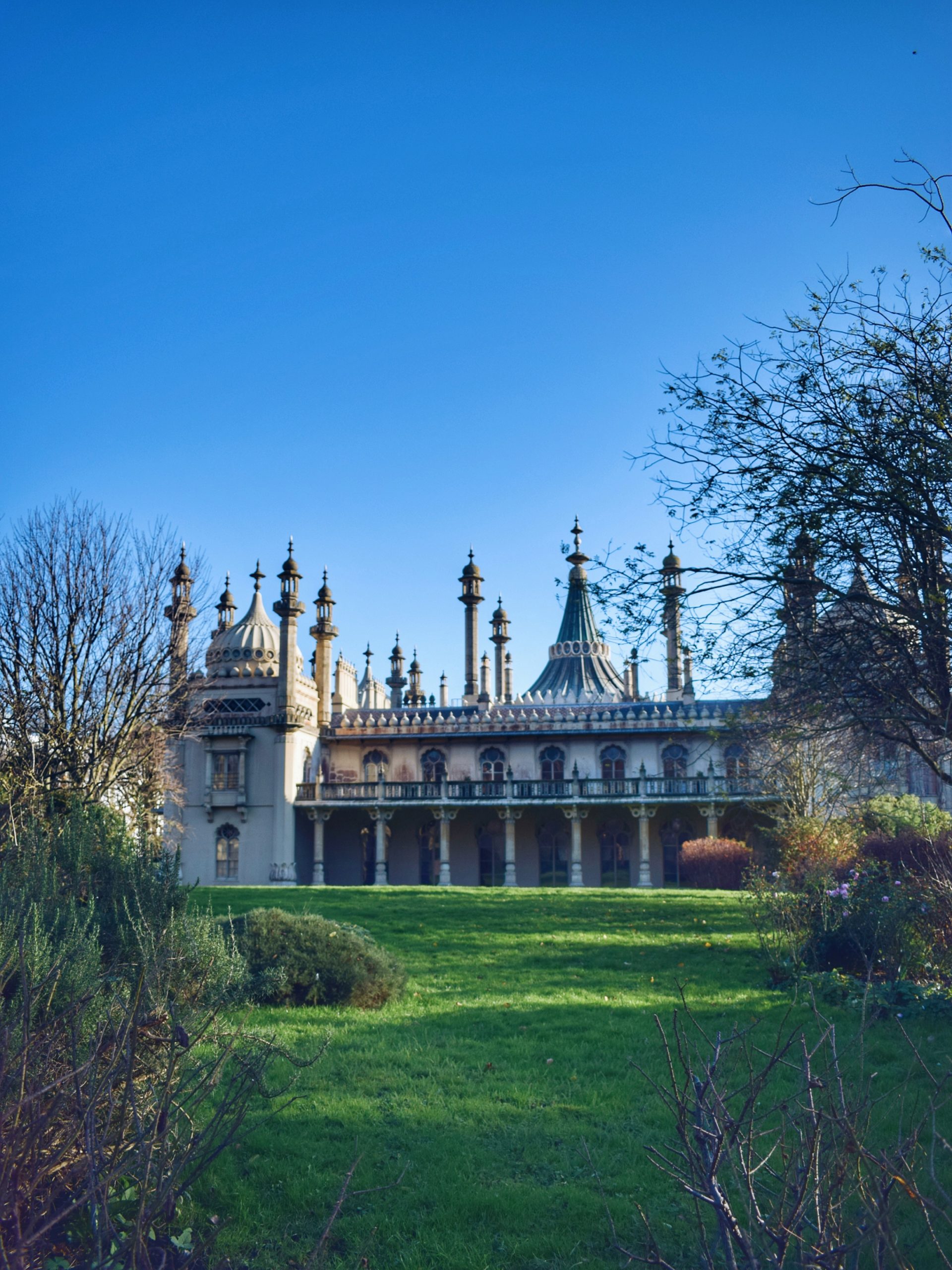 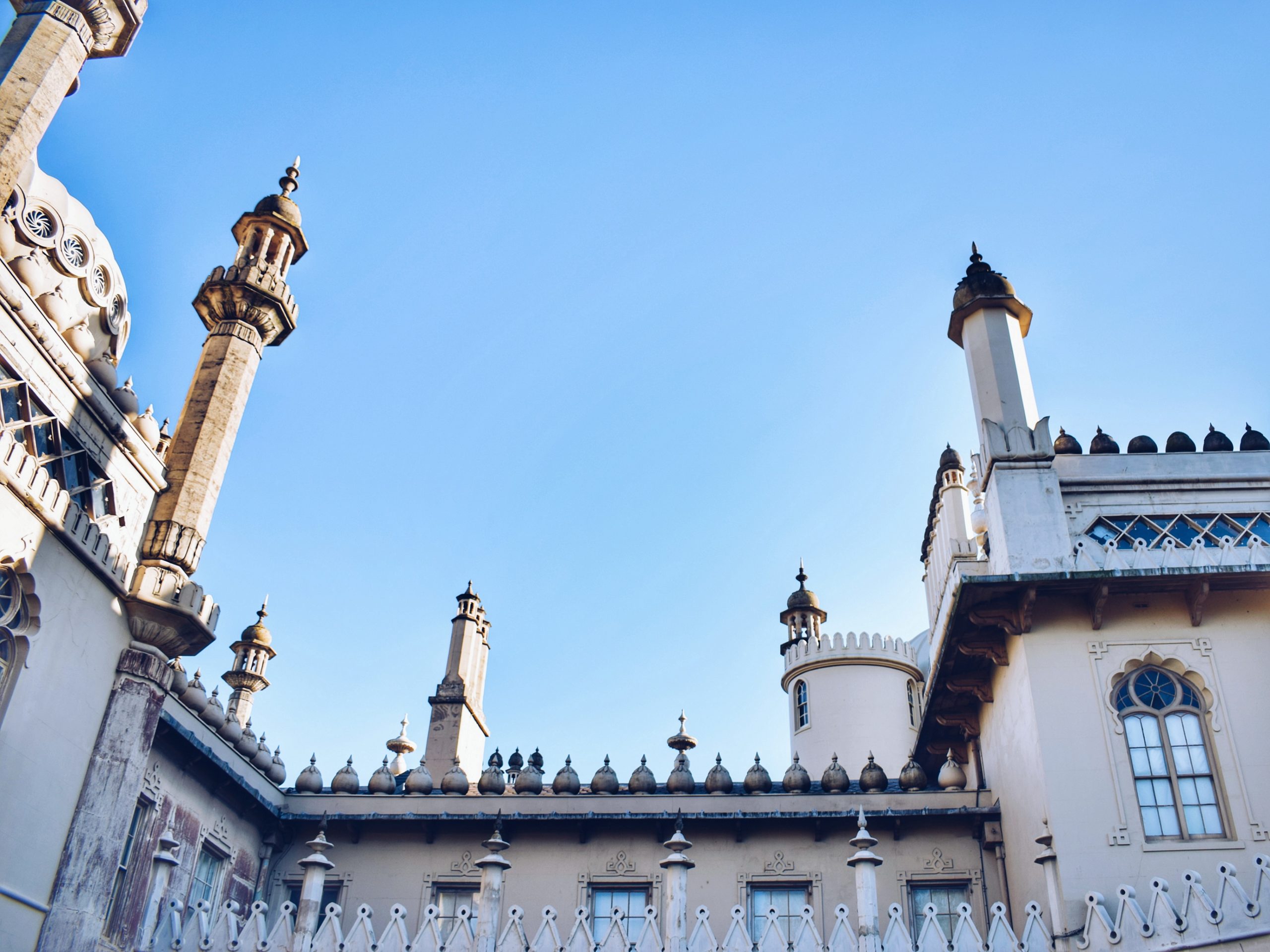 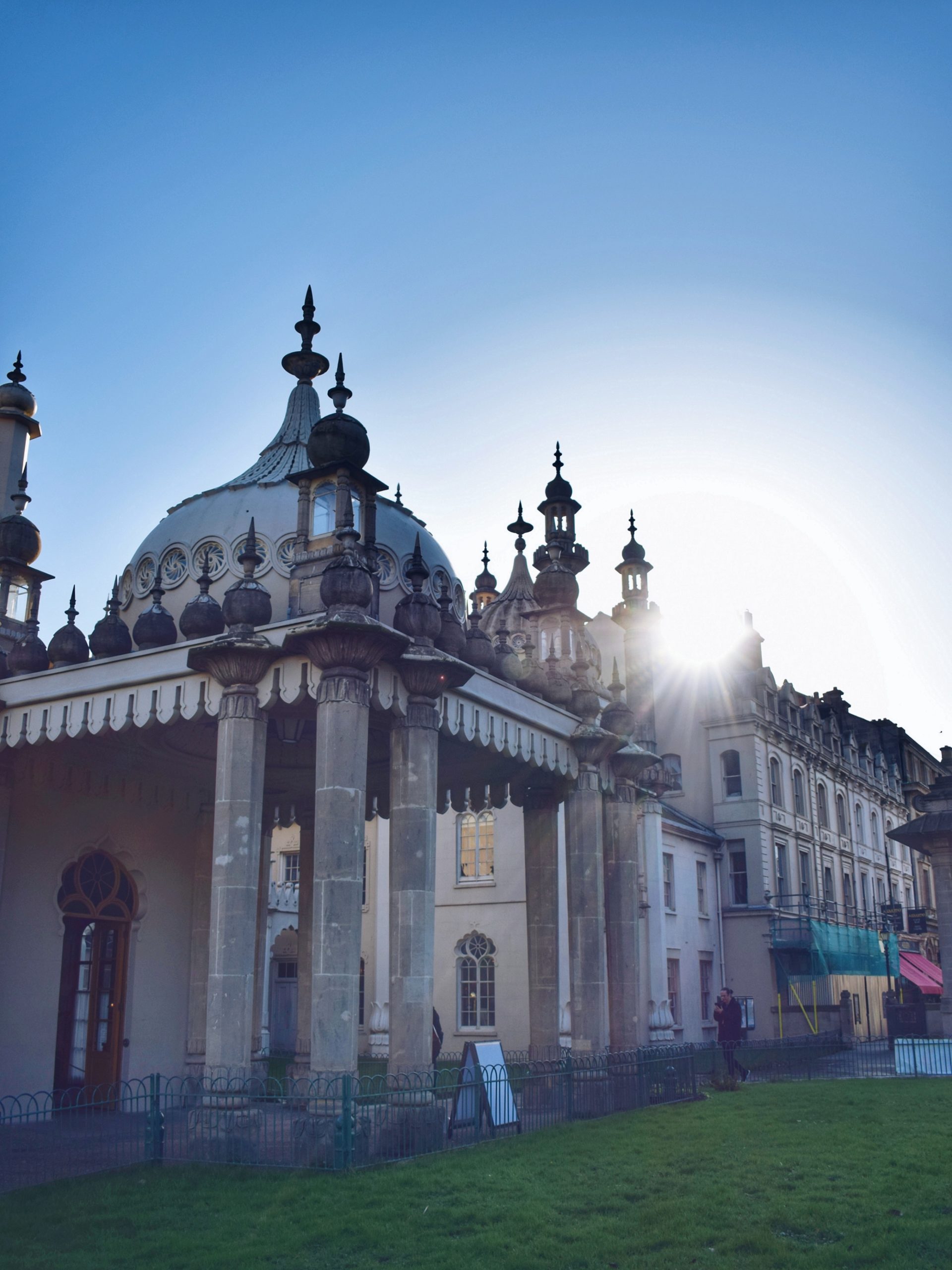 This is the calmer part of the city with its brightly coloured beach cabins and a lovely array of green areas mingled with mellow atmosphere and beautiful houses. Even though there’s no specific sights to see here, it’s still worth a visit.

Me and the friend I mentioned earlier visited Brighton in 2012 and stayed in the Hove area close to the beach. It really is a lovely suburban area with a sophisticated feel. Right up my alley!

You really want to get lost here for hours (why not? Google Maps will get you back anyway). If you enjoy walking around without a specific plan or destination, Hove is perhaps the best place I know for that. Pack a light lunch, stroll around and chill in a park or by the beach enjoying the moment.

Because you can’t help but enjoy the moment on your visit to Brighton.

The thing that separates Brighton from other English cities is its atmosphere. It’s much more Southern than it perhaps ought to be geographically. There are palm trees growing on people’s yards and along the beach, it has always been sunny when I’ve visited (so it must be sunny always, right?) and the people are much more relaxed overall than up in London.

Okay, perhaps not surprising that people outside London are more relaxed, but take my word for it. I’ve lived around Europe, I know what I’m talking about ;) If you don’t believe me, go and see yourself.

People are jolly in both, but in London they always seem to be in a hurry. Whereas in Brighton people come to relax and talk about anything and everything, spreading the conversation to the neighbouring tables (can you imagine that happening in London? :D), and just being a tad friendlier overall.

I love London, but I do notice the strain it has on my well-being by being way too busy and crowded. Couple days there is fine, but then I need to get away for a day to catch my breath, and Brighton sure is the place for that. You really ain’t got no excuse travel or time-wise to not visit Brighton. Traveling from London to any close-by city is so easy and efficient! I’ve never encountered such a fluid transportation system anywhere else. And I’m the one who gets lost in her own kitchen!

So, if I can manage to find my way from London to Brighton in just under an hour, so can you! Most people working in London commute for longer periods of time each morning (I ain’t kidding)! 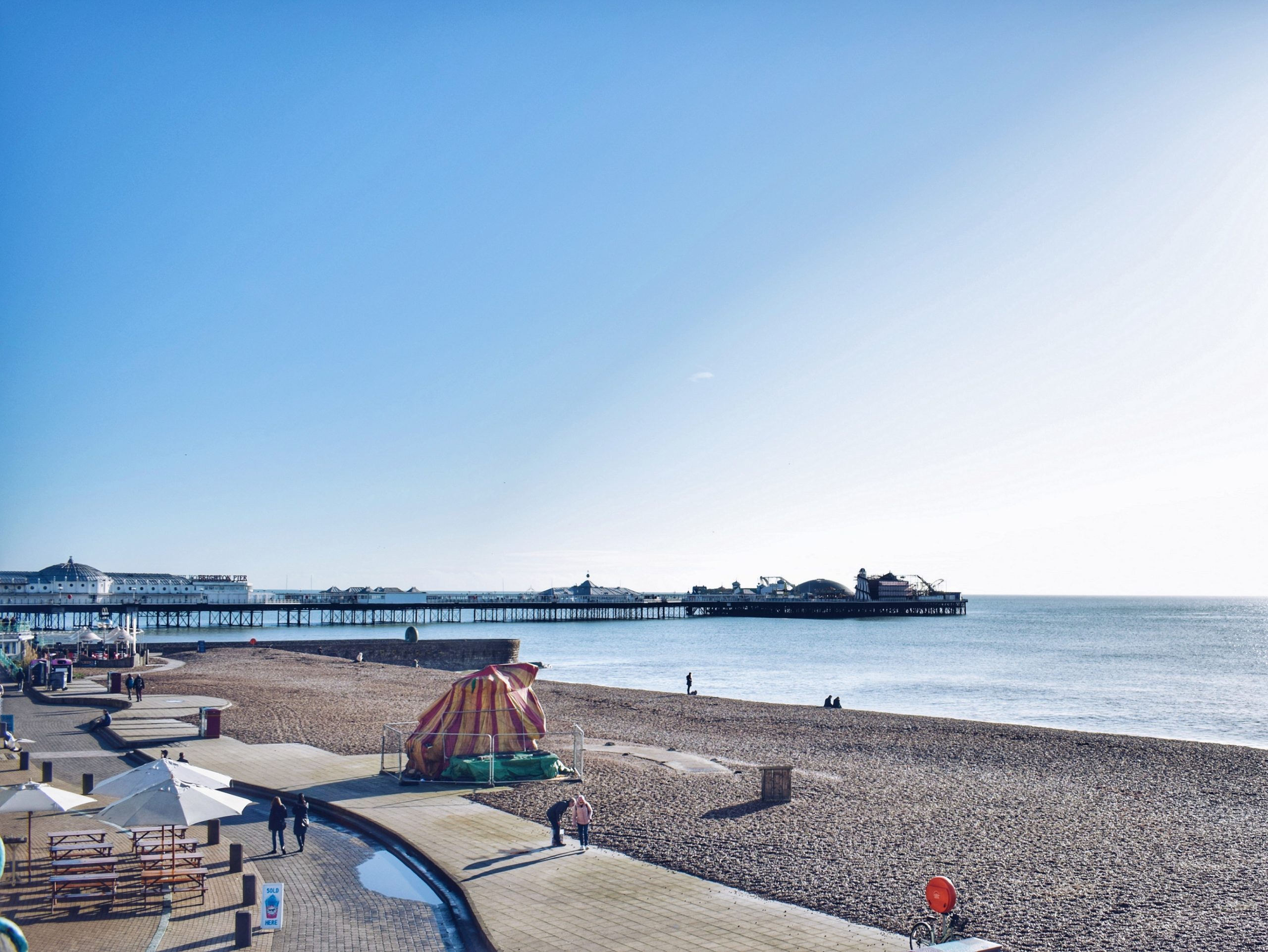 Have you been to this coast city? Or have I possibly convinced you to visit Brighton, if you haven’t been fortunate enough to find yourself there yet? I’d love to hear your Brighton experiences if you’ve been there! ♥