Skip to Content
Outlandish Blog | Teresa Maria / Travel / Did You Know This About Tallinn Christmas Market?

One thing that Central and Eastern European capitals are well known for are their Christmas Markets. But today I’m going to introduce you to one that many of you may not know about: Tallinn Christmas Market.

There’s nothing that would cheer me up more on a dark November morning than seeing that the Christmas lights have been put up the previous night. You can’t miss them shining all over the place, covering trees, making them look like magic is there, and hanging all over squares.

In Estonia it’s not that long ago when Christmas lights were a practice worthy of landing one into labor camps in Siberia. So, it’s been a pleasure to witness how each year they go crazier and crazier with the lights; there are more of them, covering a bigger area of the city center, and the shapes and sizes get more impressive year after year.

Tallinn Old Town is a UNESCO World Heritage Site and a truly wonderful place to visit. But a word of warning; despite its small size this place is super easy to get lost in. The streets are small and they all look very similar.

It took me 2 years to find my way from the main square to my favourite restaurant, Rataskaevu, which is just one street up from the square. I always went around the whole block.

But it’s not so bad if you do get lost there, because behind every tiny corner there’s something new and wondrous to see. Located in Northern Europe, Estonia has adopted a lot of its Christmas traditions from Finland and Scandinavia. Which means that they really know the true spirit of Christmas! For example:

What differentiates Tallinn’s Christmas market from its Central European equivalents is one thing in particular;

When visiting the markets in Austria, Germany or Hungary you will find yourself stuck in a crowd that’s not moving anywhere because everybody’s stuck. You finally get to that kiosk selling mulled wine but you’re pressed against the counter, forced to down it at once, before you can try and squeeeeze your way out of the way of the next hundred people fighting to reach the counter.

No such problems in Tallinn (yet…)! The tourist crowds visiting Tallinn have been growing in size each year but the amount of people is not yet anywhere near unbearable.

Despite the Old Town being a relatively small area, you have plenty of space roaming the streets and taking pictures in front of the many exquisite front doors here and there (yes, it’s a thing, and the doors here really are that special).

So now is the time to visit this Baltic pearl! Because Lonely Planet graded Tallinn as number one best-value destinations for 2018. That’s probably why, for the first time ever, this past Summer I could barely see or hear any Finns here, because most of the crowd was made out of Americans, French, Spaniards and Scandis. 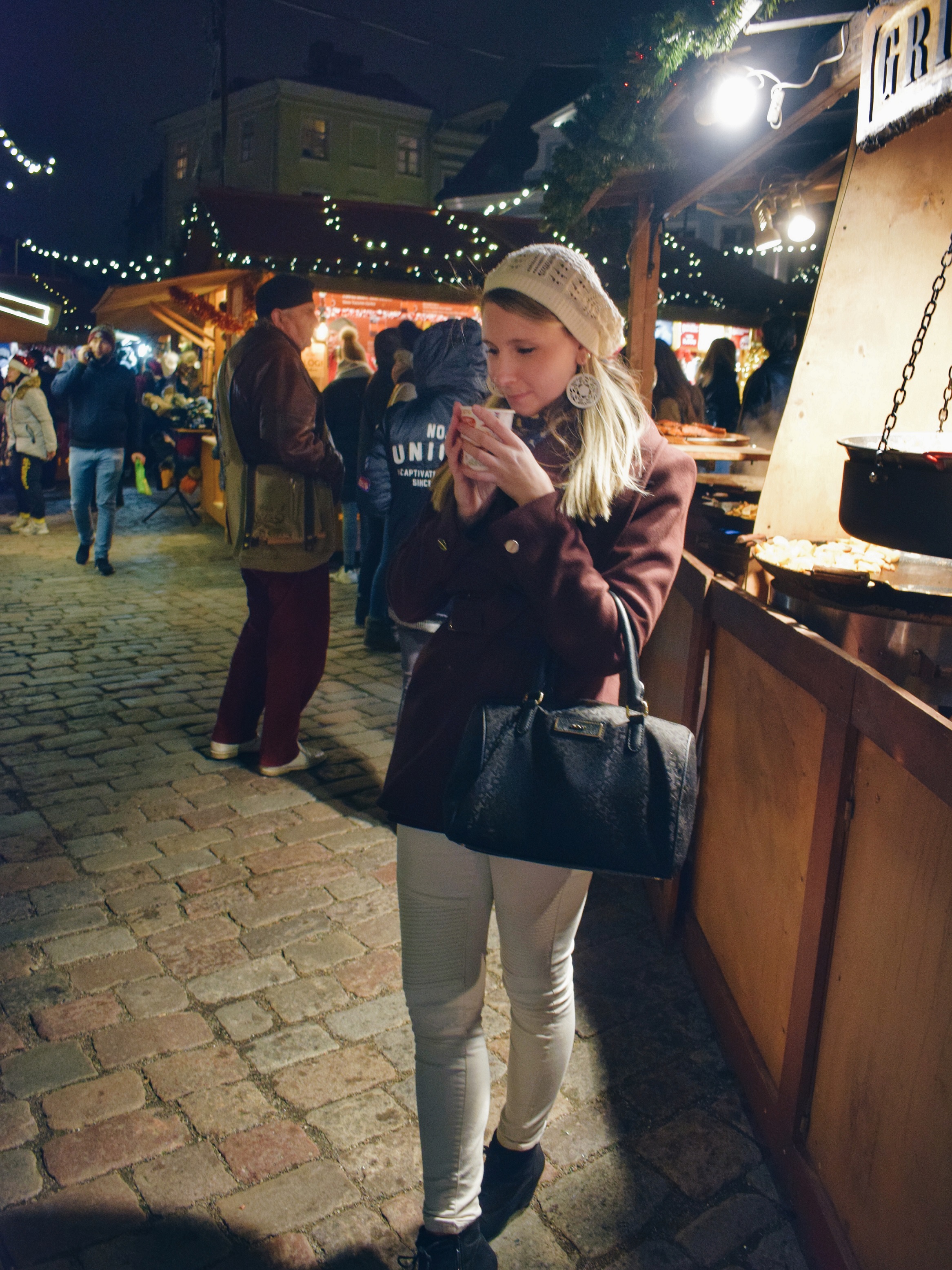 One of the main reasons why I always insist on living in the city center is that I want to be in the thick of it all. When there’s something, anything going on I want to be there to witness it! Turns out I picked my apartment from a perfect spot because it’s on one of the busiest crossroads in the city, which means that there’s a car crash (or a car-tram crash) pretty much every day after work.

And in addition the Old Town is close by, so now that the Christmas Market is open I won’t be bored for the next month onwards! I can come and taste the merry atmosphere here any time of the day any given day because it’s right there, 5 minutes from my front door.

What I love most about Christmas is the warm feeling of happiness that, I think, is brought on by the warm glow of all those spectacular Christmas lights. Okay, perhaps the Christmassy alcoholic beverages also have a part to play in this, but it’s all good.

You never see a sad and depressed face at the Tallinn Christmas Market, everybody’s happy, spending a merry time with their friends and family. What could be better?

Have you been to the famous European Christmas Markets? Which one has been your favourite? ♥