As a firm animal-lover I’m not a big fan of zoos. It’s very rare to find a zoo where the animals have the opportunity to live any sort of comfortable life and where the enclosures are big enough for them.

Estonia’s capital city, Tallinn, has a very nice zoo with a wide variety of animals “on display” (god I hate that word…) from rhinos to polar bears. But I wasn’t impressed by the small and uncomfortable spaces that these animals were kept in.

Thankfully there are plenty of alternatives for zoos these days; most farms take in visitors to showcase and educate them on how animals live in their natural habitat. Of course, this limits the range and amount of animals per farm, but it is definitely educative and much more fun when you get to actually interact with the animals.

I’ve visited plenty of such farms in Finland, but I think my favourite so far is the one we visited here in Estonia couple weeks back: an alpaca farm.

Alpacas are a little bit smaller than llamas, much fluffier and, most importantly, they do not spit. We found out about this particular farm through my friend’s colleague; as Norwegians you would expect them to know about an alpaca farm founded and run by a fellow Norwegian.

We had the pleasure of meeting the owner on our visit there. He had bought the huge piece of land with his Estonian wife years ago, and when thinking about what they should do with the land, alpacas came into picture because of the quality of their wool.

Thank goodness for that! One cannot escape the cuteness attack when visiting this place! 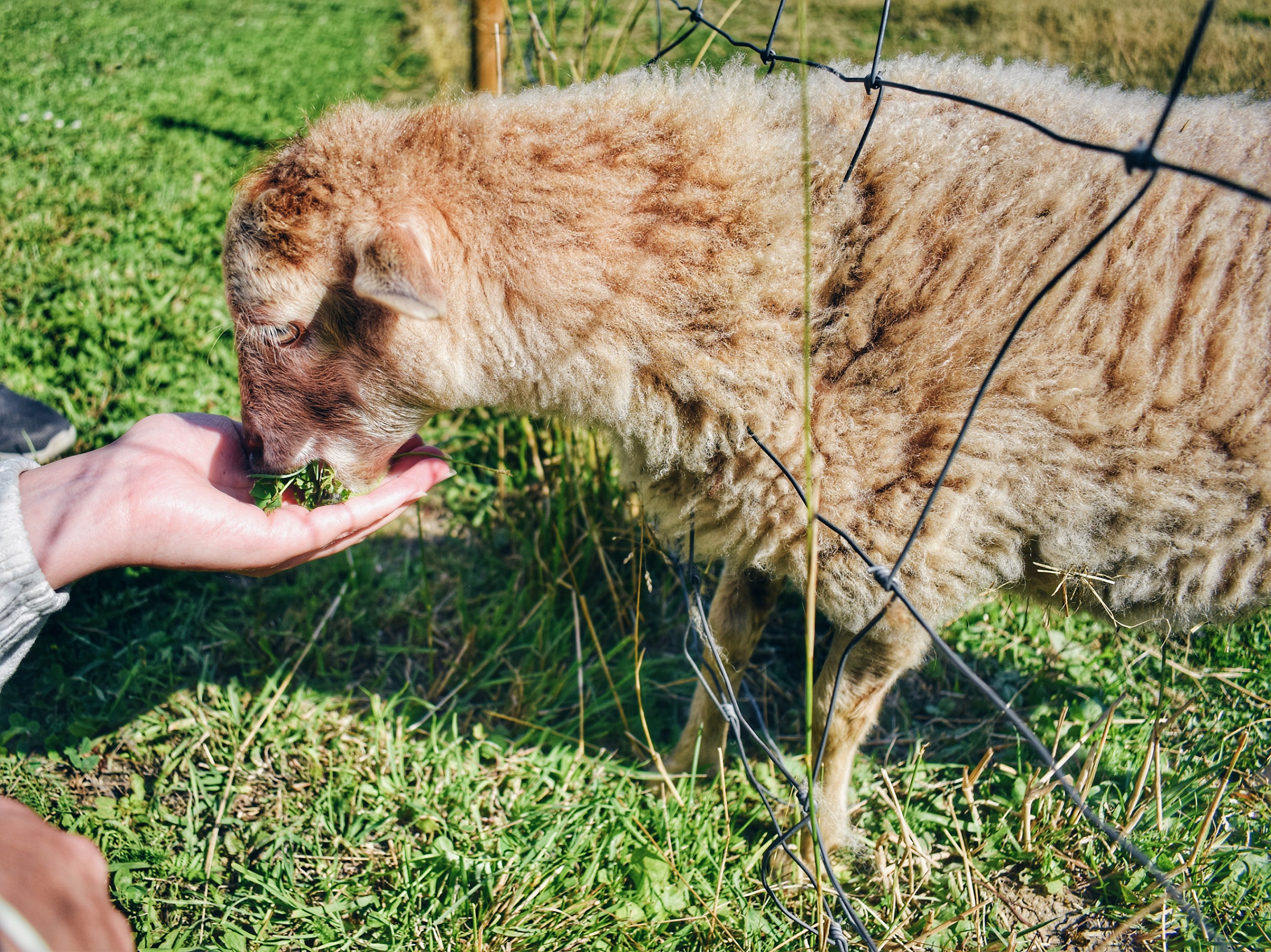 We arrived to the farm, which is located about 15 minutes drive away from the spa city Pärnu, by midday just 20 minutes before the next tour was due to start. We had just enough time to go around the whole farm, which included a lot of animals: mini-sheep, llamas, bunnies, chickens, goats, a blind dog called Mia, and an intense array of biting insects.

We went to see the mini-sheep first and fed some clovers to a particularly friendly fellow from our hands while he tried to push through the iron wire fence. We were a tad worried he might hurt himself.

Next we went to say ‘hi’ to bunnies and the llamas. While taking a short video of the llamas to keep my Instagram content flowing, I captured a noise on the background; Monika hitting Karin when trying to shoo away a horsefly that had bit her.

I got my own share of nasty insects as well, when another horsefly bit a good chunk of flesh off my knee leaving it itchy and aching for days. Little fuckers.

Then it was time for the tour! First they let us into the goats’ enclosure, and while filing in through the gate one goat came to supervise our entering. The guide told us he was called Putin.

I almost soiled my pants when he told the reason for this poor fellow being given such a horrid name; he had a nasty habit of bossing the rest of the herd around and trying to lead the pack, but he was particularly shit at it. Thus, Putin was an appropriate name.

The goats were so cute and very friendly. They’ve been used to humans since their birth, so they weren’t afraid or timid at all, which obviously meant that there was no reason to expect them to attack. Nonetheless, some of the horns looked threatening.

After we’d gotten our share of the goats’ company, it was time to move on to the alpaca enclosure. There were loads of babies, and just like the goats, the alpacas were also very used to humans roaming their enclosure.

Few facts about alpacas. Did you know that:

I cannot get over how happy I was when, almost instantly after stepping into the enclosure, a small brown alpaca came bouncing through the pasture towards us. She definitely knew that treats were arriving.

And sure enough, she was going from one person to another and people were feeding carrot pieces to the little creature. She was a greedy sod, I don’t think the other alpacas got any carrots at all. But then again, if somebody looks at you like this, with eyes and eyelashes like that, could you ever say ‘no’!?

We kept roaming around the enclosure, trying to get the other alpacas interested in the carrots as well, but they didn’t seem to care much. Instead the brown one followed people like the most devoted service dog and poked us with it’s incredibly cute little nose.

When we were out of carrots, and the insects were getting too much to bear, we exited the enclosure, called a taxi and enjoyed ice creams while Karin had a chat with the Norwegian owner.

He told us that the little brown alpaca was an adult, despite its small size, that it was a girl, and that it ate 50 cups of carrots out of the 200 cups they sold each day. That’s a lot of food for a small alpaca. I think I’ve found a soulmate.

The Norwegian founder got the idea of starting an alpaca farm when his wife was knitting a hat for their daughter, and wondered what kind of string she was using. They googled it and it turned out to be alpaca.

And that was all it took for the idea to buy alpacas to be born. Alpacas are very social animals, and get stressed when separated from their friends, so instead of selling the cubs, they decided to start a proper farm and add other animals to the mix.

A ticket to the guided tour cost only 5€ + a cup of carrots 1€, so you get a lot of cuteness for very little money. I totally recommend renting a car and driving the couple hours there from Tallinn. If for nothing else, then just for the brown alpaca. That girl stole my heart. ♥